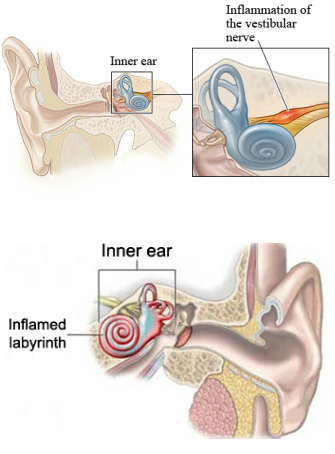 The vestibular nerve usually becomes inflamed because of a viral infection, which may have started with a sore throat, cold or flu. It can also be caused by a bacterial infection although this is much less common.

Both vestibular neuritis and labyrinthitis share similarities in their signs and symptoms but also have distinctive features that differentiates them. Symptoms of viralneuritis can be mild or severe, ranging from subtle dizziness to a violent spinning sensation known as vertigo. Other symptoms include nausea, vomiting, unsteadiness and imbalance, difficulty with vision, and impaired concentration.

Labyrinthitis can also produce symptoms of dizziness/vertigo, nausea and vomiting, unsteadiness, visual disturbances, concentration difficulties with these symptoms increasing with head movements. However, as labyrinthitis also affects the inner ear it can produce tinnitus (ringing or noises in the ear) and/or hearing loss.

The onset of these symptoms is usually very sudden, often presenting themselves when we wake up in the morning and can severely disrupt our ability to carry out routine daily activities and can be very frightening. Sometimes these symptoms can be so severe that they affect the ability to stand up or walk.

Symptoms of both vestibular neuritis and labyrinthitis settle over a period of few weeks. During the early phase of the infection, when symptoms are at their worst, it is advised to rest in bed to avoid falling and injuring yourself. Medication can be prescribed to help reduce the severity of symptoms but will not speed. You should also avoid driving, using tools and machinery, or working at heights if you're feeling dizzy and unbalanced. After a few days, the worst of these symptoms should have passed, and you should no longer feel dizzy all the time. While symptoms typically resolve within a few weeks, as the vestibular nerve is affected, some people can still suffer from residual symptoms of dizziness/vertigo due to an ongoing imbalance in sensory transmission to the brain between the affected and unaffected ear.

If you find yourself suffering from such symptoms, you can consult your physiotherapist who can prescribe a specialised set of exercises to help restore the balance and help you to resolve your symptoms.