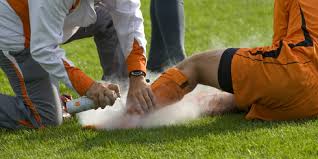 Ankle ligament recurrence rates are less severe than that of muscle injuries, ranging from 9-13% meaning approximately 1 in 10 soccer players to sustain ankle ligament injuries will sustain the same injury again. Risk factors other than previous injury include reduced neuromuscular or proprioceptive control. Deltoid ligaments are thicker than the ATFL and CFL, and is one of the main reasons why they are less common than lateral ankle ligament injuries. Another risk factor that augments the chances of ATFL and CFL injury is the mechanism of injury. Inversion injuries, where the foot is forced inwardly excessively, place excessive strain on CFL and ATFL and are the common mechanism of straining these ligaments.

Other risk factors specific to soccer and ankle ligaments include playing surface. Natural grass and artificial grass don’t affect injury rates for any injury other than ankle ligament sprains in soccer player. Ankle sprain injury rate is 35% higher when playing on artificial grass. Increased traction between shoes and the artificial surface is a likely contributing factor to this increase in risk.

Though much less common, syndesmosis injuries are far more severe than deltoid, ATFL and CFL strains from a time loss perspective. ATFL,CFL and deltoid injuries tend to prevent players from playing for an average of 11 days.

Treatment should include an initial first aid period to reduce inflammation. Rehabilitation should subsequently include strengthening in all the planes of motion of the foot along with restoring the ankle’s range of motion. Taping may be beneficial in players’ return to play. Rehab should also focus on balance and stability. Specific return to play drills should also precede soccer players’ return to the field of play.