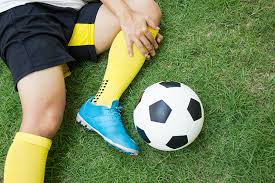 Knee contusion injuries are the third most common injury sustained in soccer. A contusion happens when a capillary or blood vessel leaks blood into the surrounding anatomical area. In soccer, these contusions most commonly occur due to damage to the medial collateral ligament (MCL) which account for 16% of all ligament sprains in the sport. Cartilage or meniscal damage is also a common source of contusion, amounting to 9.5% of joint sprains in soccer.

MCL sprains and tears tend to occur due to excessive valgus stress that may occur during a side tackle, for example. This is when the knee drops inwardly to a ‘knock-kneed’ position, straining the MCL. Damage to the knee’s meniscus usually occurs when the knee is in a compressed, flexed position and the femur or thigh bone rotates excessively. The meniscus might be in this strained position during landing and twisting.

MCL sprains prevent players from returning to play on an average of 24 days and have a recurrence rate of 9%. Knee cartilage and meniscal damage is more severe from both a time-loss and recurrence perspective. The average period it takes players to return to play following meniscus injury is 3 months and cartilage damage recurs on average of 37%.

Rehabilitation for the injured meniscus should initially consist of non to low weightbearing exercise along with a glute, hamstring and quads strength program before progressing on to plyometric training and high-level, sport-specific strengthening as the player nears their return to play.

MCL ligament injury management very much depends on the severity of the sprain. A grade 3 tear or total rupture can be treated in alimited motion knee brace for 4-6 weeks along with a comprehensive rehab program similar in focus to a meniscal rehab program.