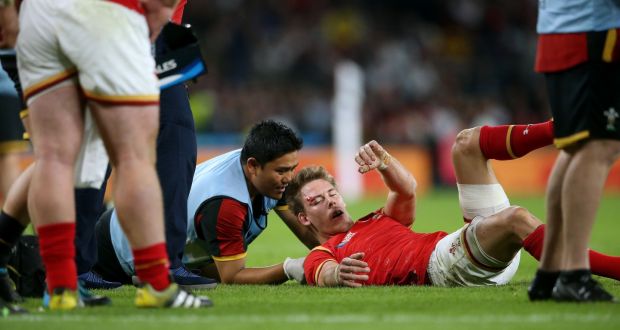 Concussion is the single most common injury in the professinal game of rugby accounting for 14% of players’ injuries. Reporting of the injury at a professional level is on the rise with nearly 5 times as many concussions reported during the 2015 rugby world cup as the same tournament in 2007. So,what exactly is concussion? It is a traumatic brain injury that causes rapid acceleration, deceleration and rotational forces, stretching the neural structures and ultimately altering the brain’s function. Normally this compromised function is temporary, but the latent and long-term consequences of recurrent concussions are transpiring to include higher rates of cognitive impairment and clinical depression in later years of life. Most concussions occur due to direct blows to the head but can be sustained by any impact that exerts excessive force on the brain.

Backs are significantly more likely to incur concussion than forwards. Regardless of the discrepancy of incidence in positions, no one position is immune to the injury. 16.7% of all injuries suffered by backs are attributed to concussion and 10.8% of the forwards, confirming concussion’s significant presence in the game.

Despite the high incidence of concussion, the return to play period is among the lowest in reported injuries. The overall percentage of time-loss attributed to concussion is just 3.6% with players returning to play on an average of under 8 days. Relative to the muscular and ligamentous injuries discussed in this blog series, the low time-loss associated with the central nervous system injury is not a clear depiction of the injury’s severity. Chronic and latent mental health ramifications due to a rugby injury beggar the question of what stage of the preventative evolutionary process the sport has achieved.

Concussion management approach initiatives have been launched by World Rugby in recent years with advanced diagnostic and treatment procedures including independent evaluation by medical personnel post-match. Despite the implementation of these initiatives, 17% of concussions reported in 2015’s world cup were only diagnosed post-match following continued play. If this statistic is mirrored at a lower level of play, with the added disadvantage of poorer access to medical attention and less thorough diagnostic procedures than that of international players, development on concussion management can only further evolve.

So, what can be done in the prevention, management and return to play following concussion? From a rehab perspective, neck strength is a modifiable factor that can alter the post impact movements of the head. That’s to say that neck strengthening can reduce the trauma suffered by the brain that leads to concussion. A 1-pound gain in neck strength correlates to a five percenate reduction in the chance of sustaining a concussion. The return to play guide issued by IRFU state a minimum of 21 days absence from play for adult players and 23 day minimum period of rehabilitation for under 20s. Non-symptomatic rest followed by graded return to everyday activity, return to aerobic exercise, rugby specific non-contact drills and lastly, contact drills are integral before the full return to play of a player who has suffered concussion.