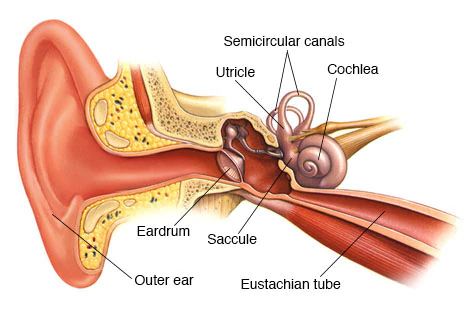 Benign Paroxysmal Positional Vertigo (BPPV) is the most common vestibular disorder among the general population, representing 17-25% of dizziness and vertigo presentations. Each year approximately 9% of the population are expected to suffer from BPPV with people over 60 years 7 times more likely to suffer from BPPV compared to 18-39-year olds.

BPPV is a mechanical problem in the inner ear. Inside your ear, there is a tiny organcalled the vestibular labyrinth which consists of 2 main structures: three loop-shaped structures (semicircular canals) that contain fluid and hair-like sensors that monitor the rotation of your head and otolith organs (utricle and saccule) which monitors our head movements and our head's position related to gravity. These otolith organs contain crystals that make you sensitive to gravity.

BPPV occurs when the crystals within the otholith organs become dislodged and migrate into one or more of the 3 fluid-filled semicircular canals. When enough of these particles accumulate, they interfere with the normal fluid movement that these canals use to sense head motion, causing the inner ear to send false signals to the brain. This causes the semicircular canal to become sensitive to changes in head position that it would normally not respond to, which is what makes you feel dizzy and can severely interfere with our ability to perform our usual daily activities.

These symptoms will be intense, come on suddenly and will last for seconds to minutes. You may have feelings of dizziness and instability, though at a lesser level, once the main episode has passed.

If you are suffering from dizziness or vertigo, physiotherapists can confirm the diagnosis of BPPV by taking a comprehensive history and perform a series of tests that involve moving the head into specific orientations that makes the dislodged crystals move within a canal and cause the eyes to move in a very specific pattern, called “nystagmus”.

Fortunately, in the vast majority of cases, BPPV can be corrected mechanically by your physiotherapist performing a treatment technique called acanal repositioning manoeuvres which consists of a specific series of head movements to liberate and guide the crystals out of the canal and back into the chamber where they are supposed to be. Often, people will find a complete or significant resolution to their symptoms following one to two sessions. Your physiotherapist will also provide you with specific exercises to restore the balance to the vestibular system so that your sense of orientation and the stability of your vision particularly when moving your head improves and you feel more confident in your balance.