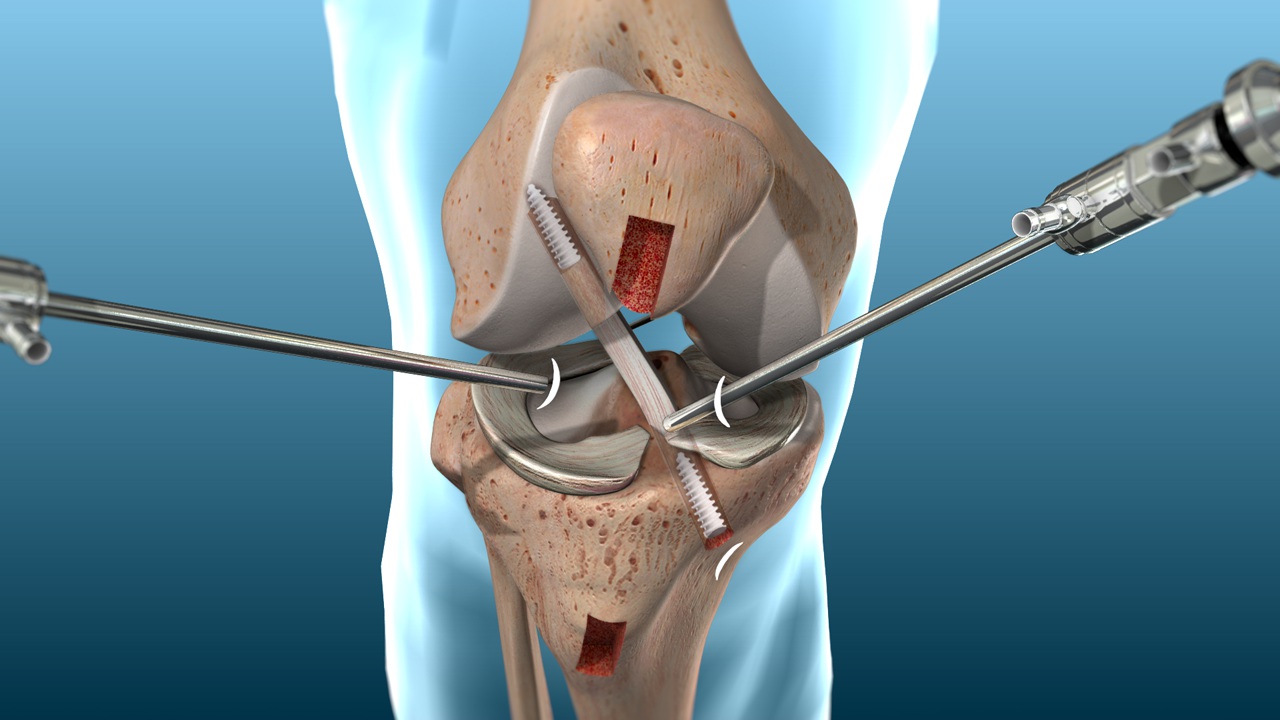 For an unfortunate few ACL reconstructive surgery becomes essential. In the US alone, 100,000 – 200,000 ACL reconstructions are performed each year. That’s one person in every 3,500 people.  The main aim of the surgery is obviously to repair the torn ACL, but how do they do that? Also, is it all that has to be repaired, and what are the long term ramifications of the surgery?

When repairing the ACL, the surgeon will replace the ruptured ACL with a new implant taken from the patient. In general he has two options: patella or hamstring graft. In rare cases when these aren’t available, the surgeon can use an allograft from another person. This tends to be either a hamstring graft, or a tibialis anterior tendon graft but these can potentially come with further issues – such as immune reactions to another person’s tissues.

If we focus on the main two grafts used: patella graft or hamstring graft we can look at their benefits and potential downsides.

Patellar grafts were the original replacement for a ruptured ACL. These were relatively easy to harvest and insert into the knee. They didn’t require further incisions for the patient and therefore reduced the risk of infections. They are a strong graft that mimics the ACL in size and strength. They also utilise a bone to bone healing process, which is considered to be one of the strongest healing processes for bone healing.

The removal of the graft from the anterior thighs muscular chain may also effect jump height. This is due to a weakening of the muscles primarily responsible for knee extension through the weakening of the patella tendon and the long term effects of anterior knee pain on quadriceps performance.

The hamstring graph has become an increasingly popular choice for the ACL graft. Its benefits include less pain immediately post-surgery and a lower incidence of anterior pain in the months after surgery. This facilitates an improved rehabilitation process and generally leads to smoother gains during this period. In the early rehab stages we see an improved range of motion – both in terms of the speed of the return of the range and in the overall range of movement gained.

The disadvantages of a hamstring graft are that you remove the tendon from the semitendinosus and gracilis muscles. This will lead to a permanent weakening of the hamstrings – you have removed one of three heads of the muscles, and a weakening of the adductor (groin) muscles – the weakest muscle group in the thighs.  This has the potential to reduce sprinting speed in athletes, as the hamstrings have been significantly weakened. It also lead to higher stresses through the remaining adductor muscles, which may compound existing injuries in athletes susceptible to groin injuries.

From a surgical point of view, the hamstring graph does not have a bone to bone healing process, and requires the input of hardware such a cortical screws. This is a slightly slower healing process than the patellar bone to bone graft. In the grand scheme of the injury, these drawback are relatively minor and only effect a small number of patients.

What else has to be repaired?

The secondary aim of the ACL reconstruction surgery is to repair other structures in the knee that were injured along with the ACL. The most common injuries associated with ACL ruptures are lateral meniscal tears and medial collateral injury strains and ruptures. These will also have to be repaired to provide maximal stability to the knee and reduce the risks of future pain and dysfunction in the knee.

The primary aim of meniscal repairs should be to preserve the meniscus as much as possible. Cutting out the torn areas increases the risk of future pain as the meniscus doesn’t have its full capacity to distribute the load of the bone fully. This can lead to excessive forces being places between the bones and lead to osteochondral injuries. A repaired torn meniscus has been shown to function correctly and provide better long term result than a meniscus that has been resected.

Have a look at the animated video below to see the protocol for ACL reconstructive surgery. If you have any questions on ACL injuries, surgery or rehabilitation process call us on 01 441 0100.