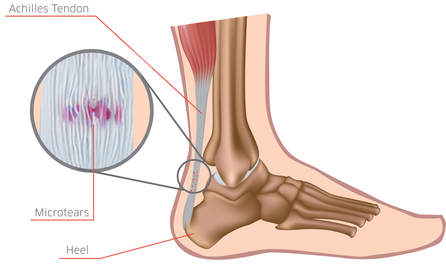 Achilles tendinopathy is an extremely common running injury with a lifetime incidence of 40-50% in runners. Runners are 30 times more likely than inactive populations to sustain the injury. The tendon is the biggest and strongest tendon in the body, attaching the calf muscles to the heel. The difference between tendinosis and tendonitis is that tendonitis is an acute or relatively new inflammatory injury, whereas tendinosis is a persistent or recurring injury caused by overuse or an old injury. Another distinction between Achilles tendinopathy that should be made is by location. The tendon is usually injured in one of two locations; just above the heel, insertional tendinopathy, or in the mid portion of the tendon, higher up towards the calf muscle.

As with shin splints, Achilles tendinopathy is an overuse injury sustained by excessive burdening of the tendon. The healing of the tendon can be slow and problematic due to the poor blood supply of the Achilles. Intrinsically, age, increased BMI, flat or excessively high arches in the feet, reduced calf strength and ankle mobility increase the risk of Achilles tendinopathy. Male runners between 30-50 are also more likely to injure the Achilles, particularly those with a long running history. In female runners, post-menopausal women are more likely to incur Achilles tendon issues. Many of these factors are however changeable and when rehabilitated efficiently have a good prognosis. Most rehab programs for Achilles tendinopathy focus on calf strength & ankle mobility as well as modifying footwear and introducing pacing/ recovery strategies to the athlete’s regime.

Orthotics may be useful to address issues with the foot’s alignment but should still be prescribed in conjunction with a graded rehab program. Manual therapy and modalities such as dry needling can also prove very beneficial for Achilles tendinopathy as both treatment options promote bloodflow to the Achilles. Treatment and prevention of Achilles tendinopathy should incorporate eccentric strengthening which involves lengthening of the muscle as opposed to forceful contraction. An example of eccentric strengthening for the calf is a heel drop off a step, controlling as the heel drops down and returning to a neutral foot posiiton. This exercise can be progressed to single leg heel drops. 82% of athletes who underwent eccentric rehab were satisfied with their progress and had returned to running within 12 weeks of starting rehabilitation in a 2011 study. The simultaneous lengthening and loading of the tendon-muscle unit increases the tendon’s ability to absorb load, rehabilitating the tendon and preventing recurrence.