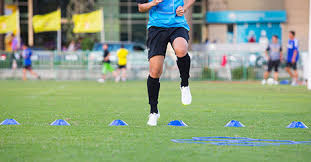 In my previous blog in this ACL series, I have talked about the seriousness of ACL injuries. We have seen examples of professional athletes who have had their careers altered, and even ended by an ACL rupture. For most athletes, there return will be marred by a decrease in performance capacity,they will lose that extra bit of acceleration or strength that separated them out from their peers. The surgery and rehab after an ACL rupture is fairly predictable, but the consequences of the rupture are not. So, is there any way that we can prevent an ACL from rupturing? Can we incorporate some sort of weekly regime that can prevent the worst from occurring?

Thankfully FIFA have invested a lot of resources in this area. In 2009, FIFA created a specific warm up program aimed at reducing the risk of the three most common injuries to affect football players, both amateur and professional. The aim was to reduce the risk of the most common injuries in football; ankle sprains and hamstring strains, and the most severe; ACL ruptures.

The FIFA 11+ is a three part warm up for training and matches. Two sections of the warm up are to be carried out before training and games, while one section should be run through only before training. The training program also has three levels of progression for the strength and balance section.

So how effective is the FIFA 11+, or similar programs suchas the PEP (prevent injury and enhance performance) program? The FIFA 11+program has been shown to reduce lower limb injuries by 45% with a 30% lesstime away from the pitch due to injury. The PEP program was shown to reduce theincidence of non-contact ACL injuries to 6 in a group of 68,000 soccer player,from 67 in 137,000 players.

This reduction is not only impressive in its numbers, but also in its long term effects. An ACL rupture significantly increases the risk of developing osteoarthritis in the knee. So these numbers not only prevent injury and the associated rehab over the year following the injury, but they also reduce the incidence of people suffering from osteoarthritis in their knees. This study was performed in high school students, so that’s potentially a lifetime of suffering from “bad knees” prevented.

The FIFA 11+ takes 20 minutes to perform at the start of a training session, and 10 minutes prior to a games. More than likely the same as your current warm up. What’s your excuses for not using it?